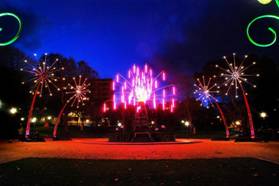 Beginning June 15 through June 22, Jerusalem will host its second annual Jerusalem Light Festival transforming the Old City into a living light art display with illuminated images projected onto its various ancient sites and attractions.
The festival will feature artistic light exhibits designed by local and international light artists throughout the Old City, as well as street events and performances, a lighting fair in the Davidson Center Archeological Garden and four different routes around the Old City following the illuminated sites and installations. Also, the former Jerusalem Municipality Building will replicate the celebratory lighting display created in honor of the coronation of King George VI in 1937, and a video mapping tour will be projected on the Rothschild House taking visitors on a journey from city to nature. 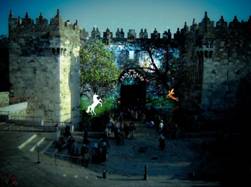 In addition, the TILT Group (France) will create a futuristic garden of light in an exhibit that encircles the audience and creates an innovative urban environment using advanced technology at the Jaffa Gate; and Italian artist Richi Ferrero will present "Bwindi Light Masks" featuring illuminated African masks alongside a soundtrack of Mongolic music accompanied by a Bulgarian chorale group at Zedekiah's Cave.
The Jerusalem Light Festival is a unique event that showcases some of the world's most creative artists transforming the Old City of Jerusalem into a living work of art. This special combination of modern and ancient will create some additional excitement for travelers arriving in Israel this summer.
Also, the city's El Wad Street will be transformed into a festively lit marketplace beginning at the Damascus Gate to the entrance of the Western Wall.